During the 19th century, railroads dominated the countryside. They brought nations together, made long-distance travel and transport easy and affordable, and connected anything worth connecting. They were a crisscrossing patchwork of iron and steam, helping create the world we see around us today. And at the start of this game, they don't exist. It's up to you to create them and transport the passengers and products that are needed across the continent.

Empire Builder is simple enough to look at. The game board is made up of 4-6 colored jigsaw-like pieces that, fit together, create a 22-26" x 17-21" map of whichever region you're playing. Evenly spaced mileposts dot the game board, each about a quarter of an inch apart. These take various forms - dots represent plains or fairly level ground. Triangles represent mountainous terrain, such as the European Alps or the Rockies of the U.S. Other geographical features include rivers and deserts, with red dots representing small, medium, or major cities. Regions, countries, cities, rivers, bodies of water, and other points of interest (such as Mt. Everest) are also named on each map. Small illustrations next to most cities show what goods are produced there.

To start the game, each player is given starting money, 3 demand cards drawn from the deck (and placed face up on front of you), a locomotive card, a pawn, and a crayon (note - the crayons used are specially designed for use with this game board. Crayola Washable Dry-erase crayons also work very well). The demand cards are the heart of the game. Each one displays three cities; beneath each city is a good and the price paid upon delivery of that good. Basic gameplay has players carefully building their tracks to connect cities where they need to pick up certain goods to the cities where they are delivering them, and then moving their pawn along the track to represent the actual train. Building track is done by drawing lines between mileposts in a continuous manner and paying the associated costs. A simple key on the board shows costs for building track on regular terrain, over mountains and rivers, and into cities. When players move their pawn into a city to pick up an item, they take a corresponding good token and place it on their locomotive card. The basic locomotive can hold two loads and move nine mileposts, but players can spend money to upgrade to locomotives that hold three loads and/or move up to 12 mileposts during the course of the game. Players will have to plan their trips wisely to maximize payout and continue expanding their rail. In general, the further a good has to be moved, the larger the payout. Once a load is delivered, players discard the corresponding demand card and draw a new one.

Though the gameplay is simple, optimizing the routes and other challenges keep it very interesting. If too many people have built into a city, you may have to rent their track to pick up or deliver from there. Special event cards drawn from the deck at random may cause floods, derailments, strikes, or other calamities and setbacks. Gameplay can be greatly extended by modifying the rule set with the variations included in the instructions-speed up games by doubling train speeds or bring more direct competition by playing with open contracts and fighting to complete extra loads available to all players!

Gameplay ends when someone has 250 million at the end of their turn and has connected the required number of Major Cities. This takes somewhere around 2-4 hours, depending on whether one goes with the minimum of two players or the maximum of six. The geography and reality of every map is spot-on: the distance between cities, where cities are, and what cities produce which goods. After several games, you'll become familiar with where cities are and what goods they produce (an unexpected geography benefit!) Additionally, Empire Builder games featuring multiple countries/regions display borders and use the local name of cities (i.e., Bruxelles instead of Brussels). Empire Builder requires plenty of scheming, risk assessment, foresight, investment management, and strategy. Cleanup is simple - you just rub the crayon track marks off with a cloth, paper towel, or napkin. Plus, if you ever have a game you can't quite finish, just leave the crayon track on the board, circle locomotive positions, slide each player's money, loads, and demands into a separate compartment, and store it away to finish later. I can personally attest to the staying power of the product - I played it with my brother two summers ago, prior to leaving for college, and he still asks me to play it almost every time I come home.

Note: Australia Rails, China Rails, and India Rails are all in their first editions. They have a colored board, but black and white instructions and cards. Stickers indicating loads must also be placed on load chips prior to beginning in these editions.

Gameplay Note: If you find that the game moves too slowly, you can double train speed without affecting gameplay too much. It is recommended you increase the cost of renting track if you play this way. 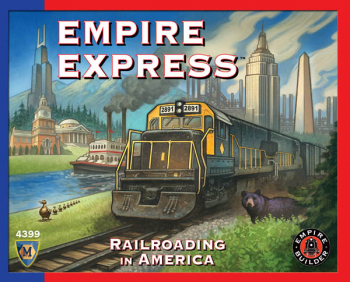