These are fairly inexpensive and simple games that let children practice word construction in a fun context. I like the smiling shark figures that grace the mats and box (kind of reminiscent of Bruce from Finding Nemo). The game play in both versions is essentially the same, only the content differs. In the short vowel version, you are building short vowel words; the word chunk game has a variety of ending "chunks" to construct words from. Each game comes with 10 different mats, each with a blank "ocean" side and a formatted "shark" side, and sets of cardboard consonant and vowel tiles (thicker than tag, thinner than puzzle pieces). You can play with a group as large as 10 or play solo, using as many mats as you'd like. Each of the short vowel mats has word families for a target vowel (_ot, _og, _op, _ox, _ob, for example) on the shark side. In this set, there are two mats for each short vowel and the families are the same on both, just mixed up. In the word chunk rendition, all mats are different, though similar families appear on the same mat. For example, there's a mat with _ate, _ame, _an, _ale, and _ank. Another has _ight, _ish, _ice, _ide, and _ime. Playing on this side, the object is to build families. Player(s) use just the consonant tiles, face down (face up for younger players). In turn, they choose a tile and see if it makes a word with any of their endings. If so, they place it on the mat. Otherwise, they return it to the draw pile. The first to fill their blanks, wins. Play is a little more free-form using the blank mat side. Here, you'll use all of the tiles to draw from. The game is very scrabble-like, only with a controlled balance between consonants and vowels. Players attempt to make as many words as possible from their drawn pile, either separately or intersecting with other words. The "wordiest" player wins! Tiles from either set can double as phonics or spelling manipulatives. These generous sets of 150 tiles are pretty sturdy and should endure a good amount of handling. 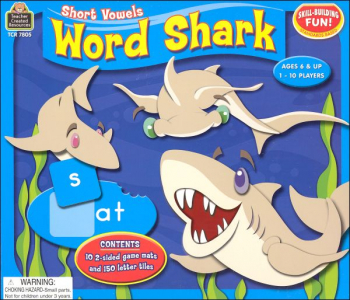